The name of Tinsukia is derived from the name ‘Tinikonia’ which means triangular. In fact, there exists one triangular tank (pukhuri) at Tinsukia, and the triangular is called ‘Tinsukia’ in Assamese. Earlier it was the kingdom of Motok Raja Sarbananda Singh and it was a village called ‘Bangmara’. With the establishment of several tea-gardens and the development of coal-mining etc. At Margherita, a Railway line was laid which was called as Dibru-Sadiya Railway, and was owned by a British Company called Assam Railways & Trading Co. Ltd. The Railway line passed through this township and the rail station was near this historical pukhuri called Tinikonia Pukhuri and accordingly, the Railway Station was named TINSUKIA or TINISUKIA.This is the event of 1904 or 1905. 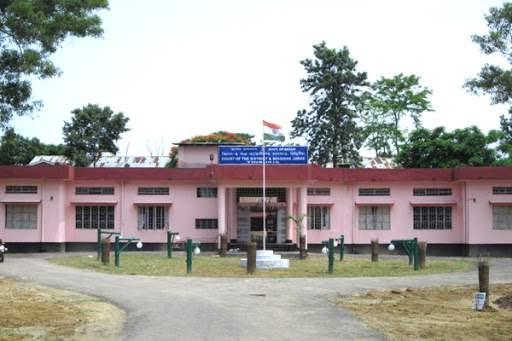 Thereafter this township being surrounded by several tea gardens and started to grow. With the discovery of Oil and the establishment of the 1st Oil Refinery of the country at Digboi the growth of Tinsukia Town also picked up speed. The 1st tea garden of Assam is “Chabua” which is also not far away from Tinsukia. The biggest tea gardens like “Powai” now owned by Tata are also in the present Tinsukia district. The township of Tinsukia was earlier a part of the Lakhimpur District having district headquarters at Dibrugarh. After the bifurcation of ‘Lakhimpur’ district, two districts were made. 1st North Lakhimpur and 2nd Dibrugarh. Then Tinsukia came under the Dibrugarh district and later on in the year 1973 Tinsukia was made Sub-Divisional Headquarter under Dibrugarh District. In the year 1989 Tinsukia has declared a separate District with three Sub-Divisions, i.e. Tinsukia, Margherita, and Sadiya which is the present political position. Before 1976 all the Judicial Courts were functioning at Dibrugarh, though Tinsukia was declared a Sub-Division in the year 1973. In December 1975 the Judicial history of Tinsukia started with the establishment of two Courts i.e.

The 1st SDJM was Sri B.N. Sharma (who retired as District Judge) and the 1st Munsiff was Mr. M.M. Sarkar (who also retired as District Judge) Since the workload of the Courts at Tinsukia was heavy and on the representation of the Bar Association of Tinsukia as well as of the general public, the Court of the Asstt. District & Sessions Judge was established at Tinsukia in the year 1986 and Sri P.K. Thakur was 1st Asstt. District & Sessions Judge. In the meantime, two more judicial courts (one of 1st Class and another of Judicial Magistrate) were also established. Tinsukia was declared an independent district in the year 1989.

When it comes to the selection process, the candidates have to take up a written exam / Interview. Selected candidates will be paid a handsome salary (as per Govt rules). The type of questions that are asked in the technical interview round differs from one position to another. There are multiple steps for the selection process for the posts of Stenographer, Clerk, Peon, Process Server, Gardner, Chowkidar, Liftman, Sweeper, Watchman, Cook, etc. in the Tinsukia Court. The procedure is as follows

We advise to you for Tinsukia Court Recruitment 2021, How to Apply, Selection Process, Age Limits and other details please read given official recruitment notification carefully before apply online or Offline.

Know the current status of your case by Return SMS

Important: Case Number Record (CNR) is a unique Identity Number of each case, which remains constant. All the Advocates, Litigants, and stakeholders are requested to ascertain the CNR of their respective cases from the concerned Courts and to refer the same for all future references.